The Junior School has grown from humble beginnings 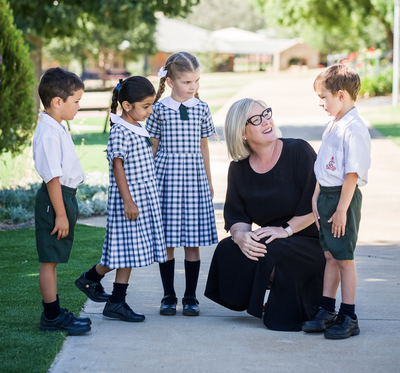 The original Primary Department of Calrossy Anglican School closed in 1974 after 55 years of operation. In 1999 it reopened again on the Brisbane Street Campus utilising demountable buildings to the side of Molesworth Oval. Our Archives Department is very fortunate to have received this advertisement from the Northern Daily Leader in 1998, informing people of this decision.

When the school opened in 1999 it had 30 students and two teachers with Mrs Ann Brown appointed Principal. The Primary School grew rapidly, necessitating its relocation to a bigger site. In 2000 the school board saw the need to prepare for the future and purchased a 27-acre block on Moore Creek Road which then became known as the William Cowper Campus. By the end of 2001 the Primary school has grown to 155 children and now has seven full time staff.

The photographs show the original Primary students and their classrooms which were located to the side of Molesworth Oval on the Bourke Street side of the Brisbane Street campus. In November 2001 with the generous bequest from the Worboys Estate the school embarked on the construction of two classroom blocks consisting of 8 classrooms and two large learning spaces. Our photographs show Mrs Bargwanna, Miss Key and Mr Tockuss with other staff and students, exploring the William Cowper grounds.

Mr Robert Black wrote in the 2019 centenary magazine “The foundations that were laid at the commencement of the Primary School have continued to provide educational, spiritual and social context in which it may flourish. While the name may have changed, these remain the constants that drive the school forward”. In 2018, after 19 years of service, Mr Robert Black announced his retirement as Head of Primary. Ms. Claire Dalziel was appointed and our Junior School has continued to grow and expand to provide for all children in the school, catering for students from Prep to Year 6.

Our Junior School staff are committed to teaching each and every student and laying strong foundations in literacy and numeracy. Our students are supported and guided through a broad range of learning opportunities and co-curricular programs.

Our door is always open, for personal tours and to answer any questions that you may have.